A walk to clear the Christmas Cobwebs

Today I went to Kerry for a hike on Mangerton. I was only looking for a short day as I was meeting Margaret in Killarney so Mangerton fit the bill. I set off on a pleasant crisp, blustery morning and opted to go into the Horses Glen and climb Mangerton North and take things from there. It had been a while since I had been here and it is one of the wildest and beautiful places in the country. Initially you have to cross some rough heathery boggy ground before the delights of the glen are revealed. Before I got to the turn into the glen I had a nasty fall while crossing a stream. I was sure I had done some damage to the fingers of my left hand but I was lucky and a couple of painful digits are my only problem, oh and the sizable swelling and cut on my shin, ouch. I suppose it serves me right for chuckling at Kevin when he had a slip on the Galtees a couple of days ago. Anyway I considered turning around for a few seconds and then continued on.


My arrival into the glen was heralded by a few resounding claps of thunder and the weather took a turn for the worse. This is officially the wettest spot in this wet country and once again it lived up to its reputation. It didn't matter too much as I was pretty wet already from my close encounter with the stream and if anything it only added to the atmosphere. I was threading quite carefully as every rock was super slippy and seemed to want to sent me tumbling at the first opportunity. After a while I arrived at the point where the ground rises steeply up towards Mangerton North and here the rain turned to wet snow. This was an unexpected bonus and I was getting a proper taste of a winters day out. This was just what I needed to clear the head of any residual effect of the previous days excesses. Eventually the summit was reached after an interminable steep slog. Now the wind was quite vicious and coming at me from 10 o clock and it carried snow that hit like needles and ensured that my head stayed bowed as I progressed up. I realised that I didn't have sufficient time to get to the summit of Mangerton but I was a little relieved to turn my back to the wind and make my way down to the car. A little over three ours in total and a proper lungful of winter ensured I was well happy with the day. More to come hopefully if the winter ever truly arrives.

A Christmas Hike On The Galtee Mountains

After the horrendous weather of yesterday myself and Kevin postponed our hike until today. It proved a good decision as the weather was much better today. There was still a breeze blowing and the ground was saturated after all the rain but it felt great to be out and clearing the body and lungs after the usual excess of the Christmas. Indeed such was Kevin's excess that he left what he described as a one footer in the woods. He's a bear of a man. Well as you gathered our outings aren't exactly highbrow but it was much fun. It felt good to allow ourselves the luxury of walking instead of running the hills and it allowed the conversation to flow uninterrupted throughout.

We did the Clydagh Valley Horseshoe which goes over Galtymor, Galtybeg and Cush and gives a very satisfying 14K hike and 1200mtrs of ascent. We reverted to type a couple of times and ran down most of the way from Galtybeg towards Cush and enjoyed another run down some of Cush, because we could!. Much chat was done about future plans and aspirations. As of now we are aiming for a trip to the Alps in the summer but I have no doubt that we will have other adventures little and otherwise before then. I will keep you posted.

﻿
Posted by Stephen McAuliffe at 17:11 No comments:

Last Saturday I met Kevin for a run on the Knockmealdown Mountains.  Kevin had a nice route picked out that was a good length and had lots of height gain, in other words very challenging but we wouldn't have it any other way.
As I had to work the afternoon shift it meant an early start to the day and I left home just after seven am and met Kevin in Tallow from where we headed to The Vee in the heart of the range. This meant that we would have a nice gentle run downhill to start  the day before we would join the East Munster Way trail after a few kilometers on the road. The plan was  to run the trail as far as the Liam Lynch Monument and then get onto the open mountain and climb over all the subsequent tops before descending to the car. This would be about 22K and involve around 1200mtrs of climbing. Not too bad for a winter Saturday morning. The weather was quite good as well. It was chilly and there was a fair breeze blowing as we left the car. The tops of the mountains had a blanket of cloud but it was dry so we had no excuse to grumble. We both  revelled in being out and the lovely views across the valley towards Slievenamon and the Comeraghs inspired and added to the great start to the day. The banter was good as we eased into the run. 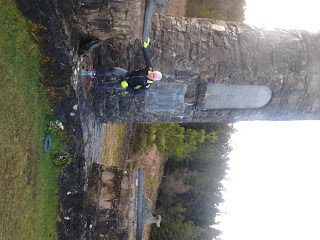 Soon we departed the tarmac and started down a good track that we hoped would connect with the trail. I was in front and once again the legendary McAuliffe route finding ability came to the fore and we took a wrong turn. I followed what seemed like a feasible trail uphill until it petered out and we had to enter a glen, cross a stream and up a short pull to join a forest road that we hoped would join the trail. Alas no, it contoured around the hill before turning once again uphill and in the wrong direction but eventually we took a rough track downhill and this thankfully at last saw us join the proper route. It added another four or five kilometers and a couple of hundred meters  ascent to our day but it added to the adventure as well. We ran along the delightful trail that wound its way through the forest for the next few kilometers before it joined the forest road that zig zagged its way uphill to the Liam Lynch Monument. This is a quite imposing structure in the style of a round tower "guarded by four hounds that commemorates a hero or villain of the struggle for Irish Independence, I guess it depends on which side you were on. It is unfortunately quite crudely built but its inspection allowed us a pleasant respite before we headed on to the open mountainside. 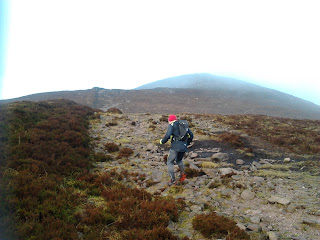 We struggled through a short section of forest and emerged on the heathery northern slopes of Crohan West. We were delighted to find a decent trail to the summit. It was fairly steep and there was no question of us running it but when we topped out at 521mtrs we were able to enjoy a nice gambol towards Knockmeal. We were now in the cloud so there was no point dallying so we turned and followed an old wall to Knocknafallia. The large cairn gave welcome shelter as we enjoyed a bite to eat before we continued over Knocknagnauv and down to the base of the pull up Knockmealdown. This is a steep 270mtrs and with more than 20kilometers already done we felt every step. Still we pushed hard and set a good pace the whole way. We were delighted to reach the top as this signalled the end of most of the difficulties and it promised to be mostly downhill from here. We ran wearily down to the col before the final easy push to the top of Sugarloaf Hill. A brief stop for fuel here and we set off down the steep stony track that made running almost impossible. Still it is quite short and we were soon back at the car. We were delighted with our morning and after a quick change of clothes we were off. All in all we had done about 27 kilometers and 1400mtrs of climbing in just over four hours. We hadn't pushed ourselves too hard but it had been a tough substantial outing. Here's to the next time. 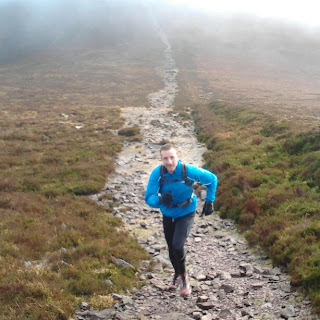 Posted by Stephen McAuliffe at 12:15 No comments:

A week ago I had high hopes of getting a proper winter day in Kerry where the rust could be blown off my sadly neglected ice axes. Ah well I hoped in vain and instead I found myself leaving the car in a gentle breeze kissed by soft drizzle. Still on the upside I was in the company of Frank so a good day was assured. I had gone for a 13+ mile run over Bweeng Mountain the day before so a nice hike was just the thing my auld pins needed. Waterfalls everywhere and a low cloud base ensured a somewhat claustrophobic atmosphere but we didn't care as we reminisced on our trip to Wales and chatted away. Time passed and height was gained and we found ourselves atop Brother O'Sheas Gully. The breeze now became a stiff wind that carried a bracing chill. We were soon at the summit where we sheltered from the wind and enjoyed a quick bite to eat. Descent was via the Heavenly Gates which always shows the mountain off to it best advantage and with the rain getting ever heavier we sploshed our way back to the car. A different day to what I had hoped but fun nonetheless. Coffee and cake in Killarney after was mighty fine.

Posted by Stephen McAuliffe at 19:42 No comments: 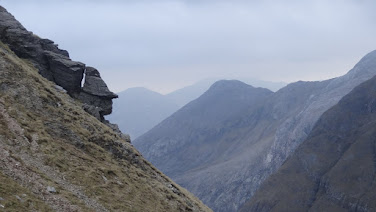